“In Knox County, Tennessee teenagers who were caught with cigarettes or skipping school can find themselves in handcuffs, facing steep fines and even criminal records, all without being represented by counsel.”

Teenage Mischief Can Lead to Jail Time in Tennessee

What scares me most about this is the lack of national uproar as a consequence, probably because most of the nation isn’t even aware this is going on. In our age of increasingly dumbed-down infotainment, when the objective is to give the masses all the candy they can eat  and to hell with what they need, stories such as this which stand as a stark warning sign along the road to oblivion are forever muffled by the deafening white noise of irrelevance and trivia.

Our children are being criminalized for acting like children, and we are OK with this because either we have accepted the ludicrous right wing/religious tough on crime stance that no punishment is too harsh for an errant child in need of correction. Or because we simply don’t care or don’t want to know.

But the future has a memory, and when she looks back at how ignorant we allowed ourselves to be, and how we tossed our own children onto the funeral pyre like so much cordwood as a willing sacrifice to that ignorance which we cherish so dear, there will surely be hell to pay.

The never-ending assault on public education

It’s not anything new, and I’m sure certain folks might suggest that I should just calm down and get used to it, but as anyone who has known me for longer than a day or two already knows, ‘getting used to it’ just isn’t my style when it comes to injustice. And the continued assault on public education, which is synonymous with an assault on the poor and far less powerful, is something that I will never allow myself to accept. 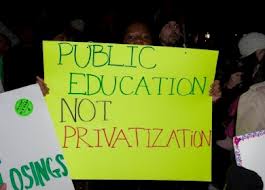 What got me riled up all over again on this subject was an article I read recently entitled “Our students are NOT for sale!”, written by Bob Peterson, president of the Milwaukee Teachers’ Education Association, on his blog “This is What Democracy Looks Like.” The title of the article alone was enough to peak my interest. The content satisfied it. Specifically, Peterson discusses an Economic Policy Institute study which raises important questions about the blatant risks of turning over Wisconsin’s public schools to private interests, despite the reckless support of the state’s legislature.

Here is a quote from that study, which sounds oh-so-familiar to anyone knowledgeable about what Gov. Rick Snyder is trying to pull right here in Michigan:

During the past year, Wisconsin state legislators debated a series of bills aimed at closing low-performing public schools and replacing them with privately run charter schools. These proposals were particularly targeted at Milwaukee, the state’s largest and poorest school district.

Ultimately, the only legislation enacted was a bill that modestly increases school reporting requirements, without stipulating consequences for low performance. Nevertheless, the more ambitious proposals will likely remain at the core of Wisconsin’s debates over education policy, and legislative leaders have made clear their desire to revisit them in next year’s session. To help inform these deliberations, this report addresses the most comprehensive set of reforms put forward in the 2013–2014 legislative session.

Backers of these reforms are particularly enamored of a new type of charter school represented by the Rocketship chain of schools—a low-budget operation that relies on young and inexperienced teachers rather than more veteran and expensive faculty, that reduces the curriculum to a near-exclusive focus on reading and math, and that replaces teachers with online learning and digital applications for a significant portion of the day. Rocketship proposes that its model—dubbed “blended learning” for its combination of in-person and computerized instruction—can cut costs while raising low-income students’ test scores (Rocketship Education 2011).

The call for public schools to be replaced by such tech-heavy, teacher-light operations comes from some of the most powerful actors in local and national politics: the major corporate lobbies, including Wisconsin Manufacturers and Commerce, Americans for Prosperity, and the Metropolitan Milwaukee Association of Commerce (MMAC). It is these groups, rather than parents or community organizations, that provided the impetus for legislators to consider proposals for mass school closure and privatization in Milwaukee.

This attempt to swallow public education is going on in cities across the country, but so is the resistance to those efforts. We can’t stop fighting this madness until we win.